Don't you love giveaways? Pink By Design is doing just that!

Seriously what the heck am I doing here? I thought I was going to give up blogging but you know I may just start back up! I think I have a case of ADD and I'm not kidding. I wouldn't kid about something like this and I the way I have been bouncing from thing to thing makes me wonder. My family jokes and says hey we think your ADD is kicking in :(

On to some stuff we've been up to:

I went on a scrapping retreat in the mountains with Tami and Dina. It was three days of scrapping and eating! The following week we went to Vancouver to watch the US Women's National Soccer Team compete in the Olympic Qualifying games! The last two standing were US and Canada just as we expected. We went back to Vancouver and the US beat Canada 4-0! The great news is that both teams are headed to the London Olympics this summer!!!! Also we have attended lots of Varsity soccer games! Our daughter is a goalie and we have been cheering her on! I may be biased but she is pretty darn good! She has been playing soccer since she was 4 and has never taken a season off. She has even been on three different teams for a short time but we love it! 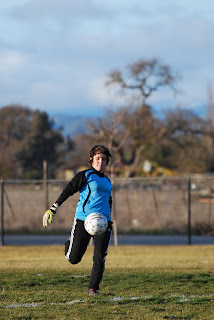 I also celebrated my 41st birthday...dang I'm getting old, HA! I will be celebrating with my girlfriends this week as I was in Vancouver on my b-day. Actually I was flying from Vancouver to S.F. . My family and I celebrated my b-day while in Vancouver and also when we returned as Christina was not in Vancouver with us.

Here are some pics of the soccer games, we went to 9 games total I believe. 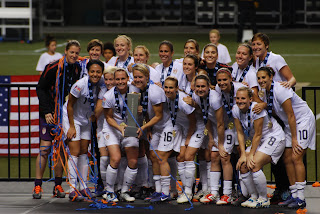 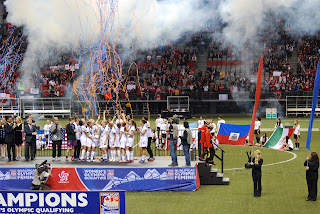 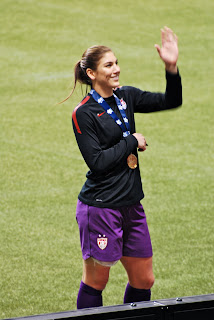 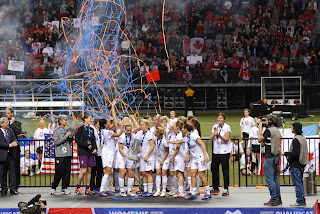 I really want to make these for my party this weekend!
Posted by Juls at 11:00 AM 4 comments:

Almost there
Originally uploaded by n2scrapping8
Entering the city of San Francisco!
Posted by Juls at 9:17 PM 1 comment:

Building in SF
Originally uploaded by n2scrapping8
Posted by Juls at 9:16 PM 1 comment:

Building in SF
Originally uploaded by n2scrapping8
Had to post the following photos individually.
Posted by Juls at 9:16 PM 1 comment:

Went to San Francisco & I Got My Scrap OnToo!

I went to a scrapbook event yesterday at Cordevalle with some friends. We met new some new scrapbookers through Meet Up and they were all very nice ladies. The staff at Cordevalle were very sweet and accommodating! The food was amazing and we would return to scrapbook there again in a heartbeat!! The hostess Arianna was super nice and even gave us a cute goodie bag/bucket filled with Easter chocolate, tissue, notebook, and a scrap case! I didn't take my camera but here is a layout I did.

Richard and I took Lauren and her friend Christian to San Francisco this past Friday. It's an interesting and beautiful city but not one in which I would want to live. I am used to a slower pace than the pace in SF. People coming out of no where and crossing the street without a second thought. Seriously some guy almost got hit by a car and he was angry with the driver of the car but HELLO you crossed and we had a green light...idiot! With that being said the weather was good a little windy and a little chilly at times but overall a good weather day.

The first stop we made was the . We had some awesome lunch meets, empandas and the kids had vegan/organic donuts. Seriously Richard and I could have spent the whole day there eating, drinking, shopping and people watching. We walked like what seemed like forever! We walked to the Musee Mecanique Mechanical Museum it was an interesting place to say the least. We each had our fortunes given to us by a mechanical old woman. After that the kids chowed on some fresh crab while walking over to Pier 39. We went our separate ways and Richard and I had a drink while the kids walked around. We finished the day in SF walking the city and going to a few stores. When we got into Morgan Hill we stopped at Huntington Station for dinner.
***Darn photos will not load so I will try posting them individually.
Posted by Juls at 3:35 PM 3 comments:

Juls
I have been married for 22 years to a great man. I know I don't tell him how great he is often enough. I have two daughters 15 and 22 years old. We also have three dogs Lulu (the Yorkie) Trina (the pit mix) and Daisy (the Jack Russell). Boy they are a pain sometimes but we love them and they are spoiled.I love to scrapbook, soccer, garden, shop, and hang out with family and friends. Oh I like to try new recipes too :)

Do you heart Zappos, too? 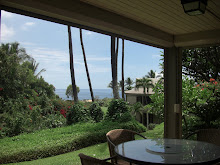 ~Week in the Life~ Pics QUOTE OF THE DAY

"It was a man's world . Then Eve arrived." -Richard Armour

These are a few of my favorite things.